Once arriving Hawaii Volcano National Park, our tour first headed towards Halemaumau crater which began erupting in 2008 and has been ever since.  Before even arriving at the lookout, Halemaumau’s massive plume of smoke was clearly visible.  When we got there our guests stood in amazement at the source of the giant smoke plume. 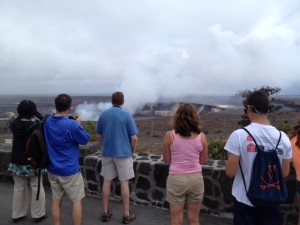 The crater is known as Halemaumau (The House of the Ever Burning Flame) and is the legendary home of the volcano goddess, Pele. A clear division of two climate zones can be seen here: the arid Ka’u desert and the lush Ola’a rainforest.  Hawaiian Folklore speaks of how a great battle between Pele and Kamapua’a, God of the Rainforest, took place here and created the unusual division between two very different climate zones.  Our guide took the guests into the Jaggar Museum next to the lookout where we were able to see in better detail the different types of lava rock formations found all over the island, traditional and modern seismology equipment, and many paintings that depict Hawaiian deities and the legends associated with them. 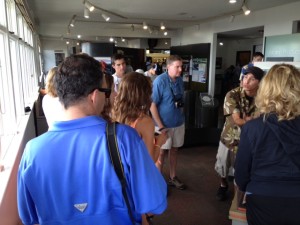 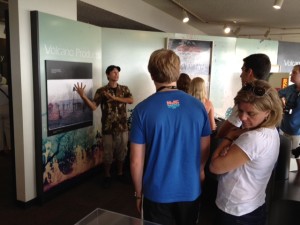 We left Jaggar Museum and began heading towards the steam vents.  The substrate is so porous in this area that rain water just seeps down through the volcanic rock and eventually comes in contact with very hot rocks that are heated by magma deep beneath the surface;  This creates steam which eventually escapes through cracks and vents on the ground surface.  We walked around and through the billowing steam clouds enjoying a sauna like experience, and then began to head towards Thurston Lava tube. 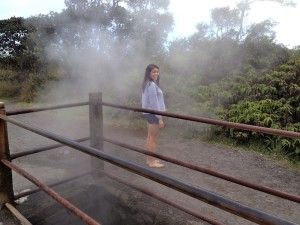 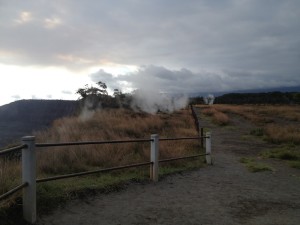 Thurston’s Lava Tube is in the center of a very well preserved Hawaiian rainforest.  Prior to western contact, these forests were  believed to be home to over 50 different species of finch, but today those numbers have dwindled down to just a handful.  .  We walked along a marked trail for just a couple minutes, as I showed the guests some of the rare indigenous plants found in this forest.  Not too long after, we came to the opening of a large lava tube created long ago by a gas bubble in the lava flow. 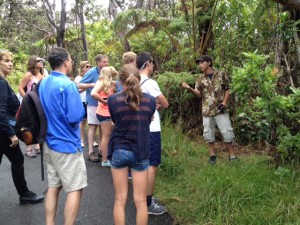 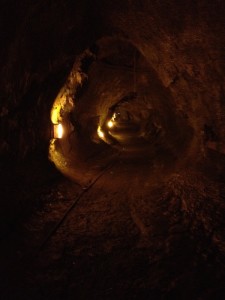 Our next stop within the park was at Kilauea ‘iki lookout.  From here we had a better view above of the tree canopy which made it easier to catch a glimpse of some of the rare endangered bird species flying from tree top to tree top.  Kilauea iki last erupted in 1959, and created a very large lake of lava.  You can also see Halemaumau crater from here far in the background.